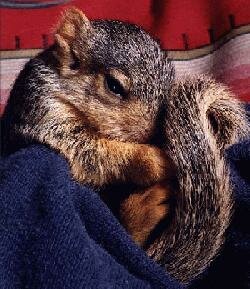 The idea of building a Permanent Shelter for Wildlife Rescue has been a dream for quite a few years. When Wildlife Rescue got started nearly 23 years ago, wildlife rehabilitation was in it's infancy, and the work was literally done in people's kitchens. We have always had a close relationship with the Palo Alto Animals Services Division, and at one time, we worked out of THEIR kitchen! Even so, Wildlife Rescue is an independent nonprofit organization, supported primarily by memberships, donations, and several fundraising events throughout the year.

The reason a Permanent Shelter is so important is that people are not at home as much as they used to be. The Wildlife Rescue of 20 years ago consisted of dedicated housewives who could come down to the Shelter and take all the animals that came in that day to their homes for rehabilitation. The Shelter itself served as a drop-off point for people who found injured or orphaned animals, and as an emergency clinic, providing initial care and stabilization before being transferred to a home-care volunteer.

With so many couples both working long days in busy Silicon Valley, we are faced with fewer and fewer households capable of caring for the animals after the initial care. So a permanent clinic is needed so the animals can stay there during their rehabilitation. This includes outdoor cages so the animals can acclimate to the outdoors and build the muscles the birds will need for flight, and the mammals will need for climbing or roaming. This way we can also assure that the animal care is excellent from the moment they arrive until they are ready for release into the wild.

Another aspect of the Permanent Shelter that is important is the Educational Center and Wildlife Library. This will serve the community by providing a timely and informative opportunity for people who bring an animal to Wildlife Rescue. We often see children come in with their parents, wanting to know more about the animal they just brought in. This is a perfect time for child and parent alike to learn and increase their appreciation of our local wildlife.

The City of Palo Alto would like to see this shelter built in Palo Alto adjacent to their Animal Services facility. That way, anyone in Palo Alto with an animal situation can come to the same location on East Bayshore Road. The City has offered a lease-option at essentially no cost to Wildlife Rescue, if we raise the money for the construction and maintenance of the facility. Of the estimated $800,000 cost, Wildlife Rescue has already raised $200,000 at this early stage of planning!

The establishment of a Wildlife Rescue Center with professional rehabilitation facilities and an Educational Center to serve the public will be an outstanding addition to a community that has shown tremendous interest in caring for wild animals who need help, often as a result of their interaction with humans. And the synergy of being located next to the Palo Alto Animal Services facility makes perfect sense to the City and to us.

If you would like to help establish the new permanent shelter, please contact Wildlife Rescue, or consider making a donation.